Учительница: It is time to work out with your legs. Watch our video and make the exercises together with us!

Ученик: I suppose I am going to have to pick up an object with my feet now?

Учительница: Well, not exactly. You are going to have to pick up that word for feet: the word for both feet and legs in Russian is ноги. Your socks will do as an object. Anyway it is mostly going to be everyday kinds of activities like standing, walking and not to forget, talking. Follow our Russian video on this page so you don't get lost and don't rush. More haste less speed. Don't waste your time learning things about Russian, learn Russian instead.

Ученик: It is you who always wants to go into explanations. Not me.

Учительница: Correct. That is the way it should be pronounced. The stress falls on the last "а́" in the word "нога́" and therefore the letter "o" is not stressed and it's pronounced as "u" in "up". Try comparing its pronunciation with the first "o" in the English word "comfort".

Ученик: What is this word stress?

What the word stress is

Play
А, Е, О, Э, Я
Undergo qualitative changes in pronunciation.
They have different sounds when the stress in the word moves.

Учительница: The stress is an accent placed on a certain vowel. A stressed vowel is pronounced more energetically, louder, a bit longer than any other vowels in that word. The unstressed vowels are pronounced less energetically, a bit shorter and they lose their clarity. Compare the way you pronounce words "present" and "desert" in these sentences:

The different meanings of these words are achieved by changing the position of the stress from first "e" to the last "e" within the words "present" and "desert". The stress is as important in Russian as the length of a certain vowels in English, compare: "beet" and "bit"; "peak" and "pick"; "pot" and "port"; "shot" and "short". In contrast to English, the length of a vowel in Russian has no role to play. Ноги – ноогии, pуки – pуукии are the same words in Russian. The stress in Russian is even more important than the length of a vowel in English: in the case of any misunderstanding it may bring confusion not to the individual word, but the whole sentence.

Учительница: The stress has moved one syllable (to the letter "o" in "но́ги") and the vowel "o" undergoes qualitative phonetic changes in pronunciation as a result of the movement. The root of the word "нога́" is "ног", its ending is "a": it shows that this noun belongs to the feminine gender and is singular. In the English word "leg" there is no gender ending, because of the absence of genders in modern English.

Ученик: When Maya said на другой ноге she pronounced second "o" more like "u" in "up" again!

Учительница: Now it is the word "ноге́", prepositional singular for "нога́" That is why "o" is unstressed and pronounced as the first "u" in "up".

Ученик: How do I know where the stress should be?

Where the word stress in Russian is 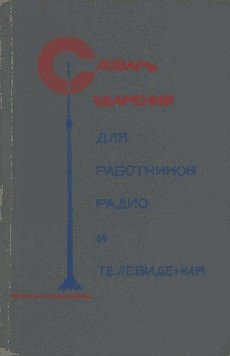 Учительница: I am sorry to tell you that you won't immediately, you will discover it only through trial and error, in other words, practice. Russians themselves are not always sure that they are placing the stress correctly, particularly on foreign words which came into Russian not so long ago. In some foreign words, it is even considered correct to pronounce the unstressed "o" the same way as the stressed one: радио, оазис.

Whole books are written about this subject by Russians and for Russians. Nationwide TV discussions and seminars are held on this theme year after year. The correct (accepted, right) stress is a distinct mark of an education in Russia. The law of Russian society says that the first thing any educated person must know, is how to apply stress correctly. Russians laugh at those who apply stress incorrectly and they can also dislike someone just because the person doesn't place it correctly.

Ученик: Dislike? Maybe I shouldn't bother with learning this language at all.

Учительница: Don’t you worry. You are going to be in a privileged position. Russians are so proud of the fact that their stresses almost always fall on the most unpredictable places, that they graciously concede to you as a foreigner and wouldn't be too hard on you. If you ask them for help they will be delighted and generously correct you. If it is any relief to you, let me tell you that Russians have jokes about the way all their leaders spoke. Those who made them about Stalin and Beria have done time for it, under Khrushchev and Brezhnev it was not such a serious offense. Even Gorbachev’s southern accent was the subject of jokes.

Ученик: All right, so I have no chance to know where the stress should be. The stress is very important and in the case of the word "нога́" it moves back one syllable "но́ги" sometimes and sometimes it doesn't move, like in the word "ноге́" (dative or prepositional case). Oh.

When I was doing the exercises with my hands, the stress moved as well but then the sound "у" in "pука́" did not change as much as the sound "o" in "нога́". Is there any vowel which is always pronounced the same?

Учительница: The letter "ё" is always stressed and always pronounced the same. But unfortunately it is usually written "e" except in dictionaries, other clever books and Wikipedia, because strictly speaking it isn't considered to be a separate letter of the Russian alphabet.

Учительница: I did my best to make a table for you that makes some sense. Have a look at it and join us for exercises with fingers.