The grammar tables should be regarded as for reference only. Print out the table containing all six Russian cases:

Учительница: The grammar tables can help you sort out new grammatical concepts, provide you with a few guidelines and show you that there is a limit to the complexity of the language. Russian cases show what role the words play in a sentence. The cases are expressed grammatically by the addition of a different ending to the steam of the word, sometimes even the root of the word may alter as well.

Morphological structure of Russian words is prefix-root-suffix-ending or steam-ending (prefix-root-suffix=steam). The Russian ear is very sensitive to the alterations of the morphemes of the words. You should listen more to the Russian speech and pronounce the Russian words so you can develop your ear and your tongue so that they may also become a bit Russian with time. Not only all Russian nouns decline (the endings of the noun are changed), but all Russian adjectives, рronouns, рossessive pronouns and numerals decline with the Russian nouns that they modify. They agree with the noun in the gender, the case and the number. 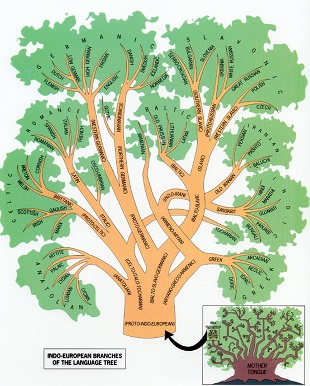 Ученик: What is this table? I can't read Russian! Remember, I d-o n-o-t k-n-o-w the letters.

Учительница: Not to worry, look at the English bits only.

Ученик: But they don't make too much sense to me either. I don't know this kind of English. What is "nominative"?

Учительница: Right. As they say, the new is the well forgotten old. So if it is of any interest to you we'd like to mention that Old English used all of these cases except the prepositional but modern English uses only the nominative (fish) and genitive (fish's) and some pronouns use the objective (him).

Ученик: It isn't too much help, is it?

Учительница: Russian and English are related to each other, they descended from a common hypothetical Indo-European language according to linguists. Look at this language tree. Sergei Nikolayev and Sergei Starostin call this common language Indo-Hittite.

Ученик: It is very confusing.

Учительница: Whatever linguists say is always right. If you think about it for too long you would never have time to learn Russian. Your predecessors used cases so you should have it, I mean this small but very important it, in your blood.

Ученик: Can you just tell me simply what are cases?

Учительница: Cases are the flesh and blood of the Russian language. Unfortunately, they don't come very naturally for an English speaker because the whole concept of them is almost dead in English.

Ученик: If they don't come naturally, why don't we start with the easy stuff then?

Учительница: Because they are so important for Russian that you can't imagine the language without them. The cases are at the very heart of the language and if you want to crack this language they are the first thing you should conquer. You can learn the functions of the Russian cases, you can think about them, but this knowledge won't make you use them naturally.

Ученик: What are we going to do now?

Учительница: Exercises. You can get a feeling of what cases are without too much pain and with the help of some simple exercises.

Ученик: Pain? What about no pain at all?

Учительница: Sorry, no pain - no gain. Go to the Russian language aerobics page.