How can you learn to make new Russian words


Учительница: Let’s speak about morphology, the morphological structure of Russian words. Since you probably don't want to be a linguist, I can share with you some of the knowledge that I have gathered from Russian teachers, from my students, Russian language books and from my experience of being Russian.

Ученик: What are these morphemes? And how do you know what is the prefix, the root, the suffix and the ending of a word?

Учительница: Sometimes you would not know exactly which morphemes make up the word but you can always try guessing.

Ученик: It is too much.

Учительница: There are only a limited number of prefixes and suffixes in Russian, you will learn them all with time. You will be able to make up your own Russian words soon, just like Russian children do and Russians will love you for it. The Russian language is very beautiful and logical. Soon you will learn the logic and you will love it. 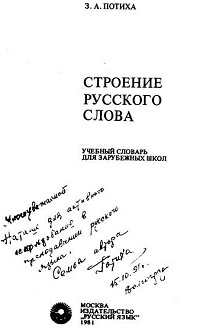 When I was a child I lived in a house next to the house a Russian linguist and Professor Zinovii Aronovich Potiha (Зиновий Аронович Потиха). When his wife found out that I had started to teach Russian in London and I am using the book "Строение русского слова", she presented me with a copy of the book with her signature and inscription.

Some Russian words with the root -уч-