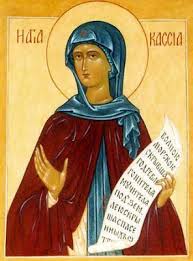 St. Kassiani the Hymnographer was born in Constantinople into a wealthy family and grew to be exceptionally beautiful and intelligent. Three Byzantine chroniclers claim that she was a participant in the "bride show" (the means by which Byzantine princes/emperors sometimes chose a bride, giving a golden apple to his choice) organized for the young bachelor-emperor Theophilos. Smitten by Kassianai's beauty, the young emperor approached her and said "Through a woman came forth the baser things," referring to the sin and suffering coming as a result of Eve's transgression. Kassianai promptly responded by saying "And through a woman came forth the better things," referring to the hope of salvation resulting from the Incarnation through the Most Holy Theotokos. His pride wounded by Kassianai's rebuttal, Theophilos haughtily passed her by and chose Theodora to be his wife. We next hear of Kassianai in 843 when it is recorded that she founded a convent in Constantinople, becoming its first abbess and devoting her life to asceticism and the composing of liturgical poetry. Tradition says that in his later years the Emperor Theophilus, still in love with her, wished to see her one more time before he died, so he rode to the monastery where she resided. Kassiani was alone in her cell (or garden), writing her Hymn when she realized that the commotion she heard was because the imperial retinue had arrived. She was still in love with him but was now devoted to God and hid away because she did not want to let her old passion overcome her monastic vow. She left the unfinished hymn on the table. Theophilus found her cell and entered it alone. He looked for her but she was not there; she was hiding in a closet, watching him. Theophilus felt very sad, cried, and regretted that for a moment of pride he rejected such a beautiful and intellectual woman; then he noticed the papers on the table and read them. When he was done reading, he sat and added one line to the hymn; then he left. The line attributed to the Emperor is the line "those feet whose tread when it fell on the ears of Eve in Paradise dismayed her so that she hid herself because of fear.” Legend says that as he was leaving he noticed Kassiani in the closet but did not speak to her, out of respect for her wished privacy. Kassiani emerged when the emperor was gone, read what he had written and finished the hymn.

The following 4 pages are in this category, out of 4 total.

This category contains only the following file.